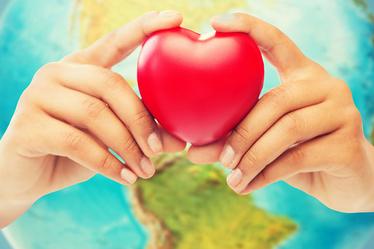 Silent Unity, the continuous prayer ministry located at Unity Village, Missouri, publishes the Daily Word​, an Affirmative Prayer uniquely created for each day of the year since 1924.

It is available as a monthly in-print publication, and can also be accessed on line here.

AFFIRMATIVE PRAYER
When most people think of prayer, they think of asking God for something.

Not so in Unity.

Unity uses “Affirmative Prayer.” Rather than begging or beseeching God, Affirmative Prayer connects with the spirit of God within and asserts positive beliefs about the desired outcome. Affirmative prayer is the same method of prayer Jesus taught when he said, “So I tell you, whatever you ask for in prayer, believe that you have received it, and it will be yours” (Mark 11:24).

If, for example, one were to pray traditionally, one might say: “Please God, help me find a job.” By contrast, an Affirmative Prayer might be: “I am now guided to my right and perfect employment.”

Affirmative Prayer reflects the certainty we are each being led to our highest good, despite any temporary appearances.

THOUGHTS HELD IN MIND PRODUCE IN KIND
Metaphysicians believe thoughts transmit magnetic energy and this energy attracts other energy of the same frequency. Whether you are conscious of it or not, your thoughts are transmitting energy that is attracting more of the same. When you remain focused on your intentions, you will draw those things into your life.

Rosemary Ellen Guiley, author of Prayer Works, says Affirmative Prayer “sets into motion the forces that enable us to manifest what we pray for.”

She adds, “Prayer is ineffective when it is accompanied or followed by negative thinking, or the endless repeating of affirmations. We have to put power and intensity into our thought, change our thought, and believe in the guidance we are receiving. If we spend energy on negative beliefs and feelings, we will get negative results, even if we and others pray daily for us. For example, if you pray for a job and then complain to others that you have no job or can't find one, you are undermining your prayer.”

“In Unity, we believe that all things work together for our highest good,” says Lynne Brown, vice president of Unity's 24/7 prayer ministry called Silent Unity. “We pray to align ourselves with God and to allow ourselves to be inwardly guided to that good. Through Affirmative Prayer, we help co-create the good that is possible in our lives. By using an Affirmative Prayer approach, we can visualize and plan for the future with faith that the power of God is continually blessing our lives with unlimited possibilities."